The northern end of the Flinders Ranges has been set aside as a magnificent wilderness park called the Gammon Ranges National Park. The backbone of this park is a high plateau covered in scrub. Off the sides of the plateau are a series of creeks which have carved deep gorges into the soft sandstone rocks. While the streams are normally dry, the gorges they have created are spectacular and well worth visiting. The best known gorge is Bunyip Chasm, a vertical sided narrow slot but there are also many other gorges like Shelf Chasm, Fern Chasm, The Terraces and Streak Gorge which are worth visiting. 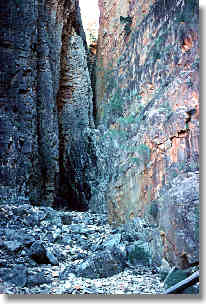 There are no tracks in the park and walkers must find their own way. Generally navigation is easy being through very open light scrub or along rocky dry watercourses. The walking is often rough as the routes used generally follow rocky creek beds. Water is the main problem and while there are a series of recognised waterholes, these are sometimes dry and all walkers should seek the latest knowledge about water availability before starting. Often you need to carry water for at least 2 days. With no tracks and heavy water loads, a visit is only recommended for experienced walkers.

Bunyip Chasm can easily be visited as a 2 day return walk from Grindells Hut. With the long access drive, most walkers will wish to see more and the most popular walk is to visit all the gorges on the southern side of the plateau, allow 5 days from Grindells Hut or 7 days from Italowie Gap. Circuit walks on the northern side of the plateau visit less features and have plenty of tough desert scrub to push through - Adrian Heard's book describes a 7 day walk to the northern area.

We have also completed a loop of the western side of the range, which had soem nice views but had plenty of light scrub and minimal water. I would suggest doing hte easier trip below which runs froom waterhole ot wterhole before attempting to walk in th edrier areas of the arange.

The Gammon Ranges are at the northern end of the Flinders Ranges being about 550 km north of Adelaide (around 700km by road). There are no towns close to the park. The park is situated between the tiny settlements of Arkaroola (a private sanctuary) and Copley. 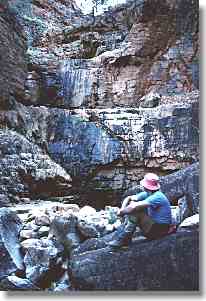 A private vehicle (preferably a four wheel drive) is normally required. It is sometimes possible to take a bus to Arkaroola (contact Arkaroola Tourist Resort) and walk from Italowie Gap north into the range. This adds about 2 days to the normal circuit of the gorges. The drive from Adelaide takes about 7 to 8 hours and a full day of driving should be allowed. There are a variety of roads to the area, one suggestion is to follow the highways to Leigh Creek and Copley then gravel roads are followed past Italowie Gap to the ranger station at Balcoona, then drive to Grindells Hut to start walking.

The SA Department of Environment & Natural Resources, 1:50,000 Illinawortina covers most of the national park. The guide book to the range is 'A Walking Guide to the Northern Flinders Ranges' by Adrian Heard which describes several routes in the park. The booklet 'Flinders Ranges Walks' by Peter Beer also has some very basic information. A circuit walk of 5 days to most of the major features is described in Bushwalking In Australia.

Camping permits are needed and are obtained from the ranger station at Balcoona Station which is located just 1km off the access road to the park. There are no restrictions apart from a complete camping ban during the hot summer period from December to March.