This is a 1040 km trail in South Australia which runs from the southern coast, north past Adelaide into the desert ranges. This is the longest walking trail in Australia, the Bi-Centennial Trail is longer but that is not just a walking trail. The trail is named after the famous artist, Hans Heysen, who painted many scenes of the Flinders Ranges. The friends group claims the trail is 1200km long. While they might manage 1200km of trail if all the sidetrails are included,  from the guide books the trail length is 1040km

The entire track takes around 55 to 70 days to walk. A tent is needed, as while some shelter huts have been built in popular areas, most campsites have no facilities or shelters. Much of the trail crosses private land and there are many restrictions on camping along the way. For some sections, commercial campsites are the only practical overnight stops. There are some huts, hostels and even farms forming part of the tracks accommodation. This is not a wilderness type walk as the track traverses a wide variety of natural and man-altered landscapes.

Unlike other long distance trails, this track is designed more for short one day walks rather than an extended end-to-end walk Accomodation along the trail is a mixture of tents, huts and commercial facilities. The most popular starting time to walk the entire track seems to be late April or May and most walk from north to south. 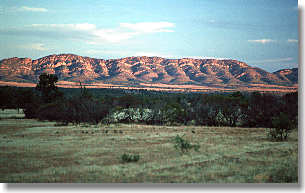 In 1969, Warren Bonython, a well known long distance walker who had walked the length of the Flinders Ranges proposed a long distance walking trail. While there was initial enthusiasm, politics from government departments and private land owners stalled planning for many years. By 1976 only 9 km of track existed and the project seemed doomed to failure. In 1978, responsibility for the track was transferred to the Department of Recreation and Sport and they soon constructed the first 50km through the Mount Lofty Ranges. This attracted public attention and support and a change in attitude by government followed with higher priority being given the track.

Slowly, more of the trail was planned and built. Then responsibility was transferred to the voluntary, 'Friends of the Heyson Trail', and the remainder of the track went swiftly ahead. They built and marked the track and it was completed in 1992. Today, it is marked along its length.

For many years, due to camping bans on privtate land and few water supplies, it was very difficult to plan an end-to-end walk. In recent years the friends group has constructed many huts and campsites and an end-to-end walk is now much easier to achieve. Note that South Australia is an arid region and water is a major issue so expect to carry water some days, take careful note of all water sources when planning an itinerary andn carry a few litres spare in case a water source is unavailable.

The trail runs for 1040 km from Cape Jervis, south of Adelaide through the Mount Lofty Ranges behind Adelaide and past the Barossa Valley, through Mt Remarkable National Park and Wilpena Pound in the Flinders Ranges to Parachilna Gorge in the northern Flinders Ranges. The original track was proposed to run north a further 500 km to Mt Babbage at the northern end of the Flinders Ranges. Whether this section will ever be constructed or marked is unknown. I have walked from Parachilna Gorge through the north side of the Gammon Ranges. The first half follows vehicle tracks through private land which requires permission to cross then becomes an off-track walk acros the rugged Gammon Ranges.

Several major highways cross the trail and access is available to many places. In the north, buses run to Wilpena Pound and Parachilna. There are many access points near Adelaide and the Barossa Valley. In the south, a train and buses run to Victor Harbour. The Friends site shows all transport options.

The SA Department of Environment and Heritage publish 2 guide books for the trail. These are essential as the maps in the books clearly show the trails route. Compared to guides in other areas, I find the notes describing the trail to be fairly poor in detail so follow the maps. The guide also includes gradient profiles althoguh these are not very good as different scales are used on different pages so you cannot compare one day with another. What looks like  steep long climb might be just a short gentle rise whiel in the hillier areas the climbs can look much easier. While the guide includes a list of accommodation options of reach section, it can be very hard to find where these are on the maps or notes. Essentially the guide is great to walk with for following the route but to PLAN an end-to-end walk you will need other resources.

I have not walked the entire trail and have not planned to do so hence I have not yet created a full itinerary for this walk. I have a friend who has walked the entire trail but dont have his itinerary. The Friends site has a table showing distnaces between campsites and huts. There are a number of sections of more than 30km and in the north the last 4 sections are 47, 52, 65 and 66km. Plan to carry water and camp in between the water sources on these long sections.

None are needed for walking the track. Camping permits are needed in all National and Conservation Parks and on some private lands camping is banned. At some sites fees apply for camping. The track is closed during summer from December until March. Local restrictions are also applied to some sections of the trail so read the notes on the back of the maps carefully when planning a trip. The extremely hot summer season is unsuitable for walking as the danger of bushfires is extremely high. Camp fires are totally banned from the 1st November until the 30th April. For the rest of the year fires are banned on all private land (the track crosses large sections of private land) so take a fuel stove.