The Stirling Range is a series of craggy peaks rising above a flat region of farmland. The range has been given National park status and is a significant botanical reserve containing a wide variety of altitude. The best known feature, Bluff Knoll is the highest peak in the southern half of the state. A major highway runs through the centre of the park. The peaks west of the highway are isolated towers and mainly visited as day walks. 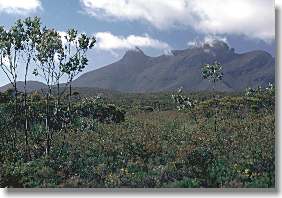 To the east of the highway is a high ridge providing some rocky towers which is a popular but tough walking destination. The most popular is the three day circuit from Bluff Knoll to Ellen Peak. It is also possible to do a shorter two day circuit from the Arrows to Ellen Peak. Water is often very hard to obtain and parties walking here must be prepared to carry all of their water needs. The walking basically follows the crest of the range which has some steep climbs and cliffs to bypass. While the walk is short, in some aspects it is similar to the tough skyline traverses of the ranges in Tasmania.

The route along the range is not a track but a rough scrubby unmarked route and will appeal to very experienced walkers. If you want a marked trail with good campsites then don't come here as the walking is arduous and the campsites are rough. The best time to walk is in spring (September to November) when there is some chance of finding water and it is also the main wildflower season.

Note that this a fuel stove only area - no campfires! Also there are very few water sources on the range, one is a barrel that is hidden high on the First Arrow. It requires an awkward rock climb to get to it (its more than a scramble) and its best to not rely on it so carry water.

The range is located in the south-western corner of Western Australia. It is about 80km north of the coastal town of Albany and about 400km south-east from the state capital, Perth. The closest towns are Borden or Mt Barker. 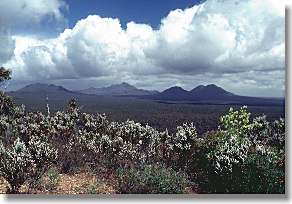 There is no public transport to the park, the closest being at Mt Barker on the Perth to Albany Highway. Access by car is good with a wide variety of roads. Most would use the Southern Highway to Katanning then side roads to Borden or approach from the south from Mt Barker or Albany.

The most detailed track information is in 'Mountain Walks in the Stirling Range - Part 2' by AT Morphet. This is basically a set of drawings of all the routes in the range showing pictorially (in diagrams) all the walking tracks and routes. Detailed written track notes are available in 'Bushwalking in Australia'.

While permits are not needed for bushwalking, a permit is required for car entry and car parking within the national park. The current fee is $5 per day or $15 for a 4 week all parks pass. You cannot walk just anywhere in the park, there is an area that is free from die-back disease and access into this area is strictly controlled. For most bushwalkers though, the die-back area is of little interest and there are no restrictions on the skyine traverse which is the walk described here. All walkers are requested to fill out the walker registration book at the park entrance.