Personally, this is the greatest wilderness walk in Tasmania. This is because the route takes about one month to walk 165 km of coastline - the route is logical and difficult to escape from, there are few tracks or signs of people and the coastline keeps varying. It is not a trivial walk and takes considerable planning and walking experience to be successful. It is also relatively expensive when compared ot other walks as most groups will need to charter helicopters for access or re-supply.

There can't be many places in the world where you can follow a coastline for a month and be nowhere near anybody or any civilisation for the entire walk. While there are places like Antarctica and Ellesmere Island, these are all icy wildernesses. Tasmania is a temperate wilderness and one of the few such places left in the world.

Don't mistake this as the best walk in Tasmania - that would have to be the Overland Track (IMHO) and a close second is the South Coast Track. The West Coast is a pure wilderness walk - no signs of other people or developments like made tracks, campsites etc. For visitors from other countries, this will seem very rare and it is.

The route basically follows the west coast from Bathurst Harbour (Port Davey area) to Macquarie Harbour (Strahan). This is the southern half of the west coast of the state. This is wilderness walking par excellence. There are no ranger stations, no habitation and no marked walking tracks. The only signs of civilisation are the flotsam and jetsam washed up on the shore, some shipwrecks, a small lighthouse half way with some old overgrown vehicle tracks to the light (they now service the light by boat) and the odd bit of pad created by walkers and illegal visitors..

While there is no track, the route is basically easy, keep the ocean to your left and the scrub to your right. The coastline itself is extremely varied ranging from sandy bays, stony shores, rugged rocky headlands and sections of sea caves, which provide considerable difficulty in passing. 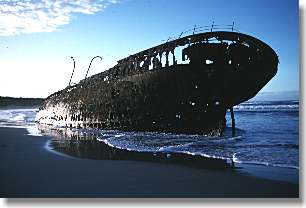 About 80% of the walk is on the coast itself. Parts of the coast are impassable and the route then crosses buttongrass plains or through the coastal scrub above the coastline. On the very difficult section near High Rocky Point, the route spends several days in dense coastal scrub (to avoid impassable sea caves) and experience at navigating and pushing through thick scrub is essential. I have walked the difficult section twice (once in each direction) and there are some difficult long days, there is no easy alternative.

It is possible to visit the northern section of the coast from Cape Sorrell (Strahan) to Hibbs Lagoon as an easier 5 day walk. Most groups that do this allow 7 days and spend the extra time visiting Point Hibbs. Helicopters can land near Hibbs Lagoon  and provide a lift in or out from there to Strahan.

This is very isolated walk. While it is difficult to determine exact numbers of walkers, from the helicopter records it appears that about one party walks the entire coastline about every second year. At least 2 to 3 groups walk the shorter easy section from Cape Sorrell to Hibbs Lagoon each summer. Help cannot be expected on this remote coastline - while fishing boats are often in the area, they often stay well out to sea and are difficult to contact. Overall, this is a difficult walk that requires a lot of off-track walking experience. It should only be attempted by walkers who are very experienced in Tasmania walking. I do not recommend this as a first time visit to Tasmania, I suggest that at least the South West Cape Circuit and one of the inland ranges like the Western Arthurs, Eastern Arthurs or Frankland Range be completed before attempting this coastline. 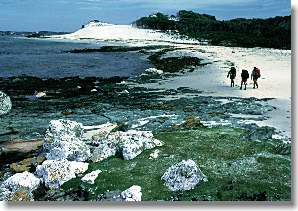 The route follows the wild southern half of the western coastline of Tasmania. Following the coastline means there are many minor streams and small rivers to cross and they can be problems when flooded. The streams have short catchments so they do drop quickly when it stops raining.

To get to the Port Davey area, you can charter helicopters from Strahan. If flying into Port Davey, then the route will take about 1 week more to Bond Bay. Chartering helicopters is relatively expensive but if there are 3 or more then the cost per person is reasonable.

The northern end is at Strahan. This is a small town on the west coast of Tasmania that is serviced by buses from both Hobart and Devonport. There is plenty of up-market accommodation in the town. Near Strahan, the Gordon River has to be crossed at Hells Gates - this cannot be swum across (its huge and fast - large cargo ships pass through it) but there is a small community of fishing people at the gates and lifts across by small boat are usually available. 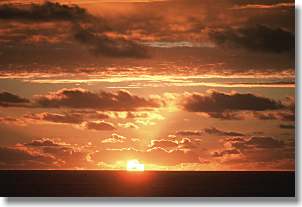 The only book with track notes to this wilderness route are in South West Tasmania by John Chapman. The notes given are in a brief format - all important obstacles and routes past them plus campsites are given. The notes do not include minor obstacles as this route should only be attempted by very experienced walkers who are capable of passing such problems.

It is suggested to add some extra days to allow for flooded rivers (suggest 30 datys in total). This is the itinerary we used in 1999. We took only 27 days but had the advantage of knowing exactly what obstacles lay ahead (was our second trip) and approximately how far away the next water or potential campsite was. We got just past the Spero River when a massive storm flooded the rivers (the biggest storm for 30 years). It did not delay us much but if it had rained one day earlier we would have had to wait about 2 days for the Spero River to drop.

The West Coast is not an easy walk. Cam Honan of The Hiking Life website gives a good account of his trip along the coast. In his overview he makes it clear how hard it is when compared to tracks that he has averaged 50km per day. I cant find a link to the actual trip report so you will find here.

A general entry permit to a Tasmanian National Park is required. The best value for bushwalkers is the 2 month Backpacker Pass for $30 which provides entry to all national parks. There are no bookings or quotas on numbers of bushwalkers walking the west coast.