This marked track follows the coast from Cape Naturaliste (northern end) to Cape Leeuwin (southern end). It is basically a 7 day walk following 124 km of coast. While the region is well developed, the coastal strip has survived in a relatively natural state. The walk regularly meets camping grounds and road access points to the coast but also leaves these quickly. With many access roads it is also easy to do shorter sections of the track. The track is a one way route and either a car shuffle must be arranged or you have to walk out to the towns from where regular bus services operate. This adds an extra half day at each end of the track. The track was officially opened on the 8th April 2001. 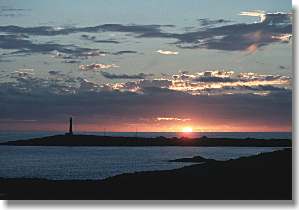 The two capes are the extremities of the wide block of land that juts out on the south-western corner of Western Australia. There are several towns in the area and the best known is Margaret River. It is known as a wine region and also for the excellent surfing on the coast. Dunsborough, Yallingup, Margaret River and Augusta are the major towns near the walk.

Margaret River is 280 km south of Perth. Westrail operate buses six days a week (no Saturday services) to the area. Generally there are 3 services each day from Perth taking about 4 1/2 hours to the northern end (Dunsborough) and 6 hours to the southern end (Augusta). At the northern end it is 13km from Dunsborough to the start of the track at Cape Naturaliste - at the southern end it is 8km from the track at Cape Leeuwin to Augusta. The only place the bus service can be used for direct access to the track is Yalingup which is 14km south of Cape Naturaliste. 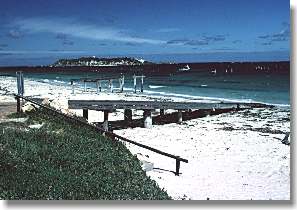 The best information on the track is in the 'Cape to Cape Track Guidebook, by Jane Scott & Ray Forma. It provides clear colour topographic maps, notes and many photos for the complete track. It also includes the Meelup Trail which is an access track to Cape Naturaliste and this would appeal to end-to-enders as it reduces the need to arrange transport. The guide is available from the authors at Cape To Cape Publishing.

Water is available along the track but often not near the campsites. Be prepared to carry water from the commercial camping grounds or the beach springs to the camps. One way to reduce the need to carry water is to plan your walk for October to December at the end of the wet season. During this period the weather improves and most springs are still flowing. Refer to the Cape Naturaliste Weather and Cape Leeuwin Weather pages.

Fuel stoves should be carried as some campsites are designated as no fire areas. If you wish to assist with maintaining the track then contact ‘Friends of the Cape to Cape Walk’, PO Box 1037, Margaret River WA 6285.

None are needed for this walk. Camping is restricted to places indicated on the sketch maps. Most of these are located well away from access roads and are free. There are also camping areas and caravan parks on the access roads beside or near the track and these can also be used - of course fees apply for camping as these are commercial camping grounds. The maps also show these sites with an *.