Queensland is the second largest state of Australia. The climate is mainly tropical with the Tropic of Capricorn crossing the states centre. The best bushwalking season is the opposite of the southern states being the cooler winter months from April to September. The state capital, Brisbane is located in the south, not far from the border with New South Wales. While Queensland is large in size, the national parks that are of interest to bushwalkers are generally quite small and scattered along the eastern side near the ocean. The extensive dry plains that sweep inland are generally of little interest to bushwalkers. The main issues for bushwalkers are the vast distances and the hot humid tropical climate. To camp in any National Park, permits are needed and generally campsites are restricted to a maximum of 12 people at a time. For popular places it is advised to book ahead for permits. 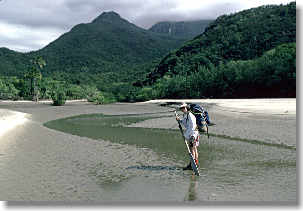 There are several popular bushwalking areas along the southern border. Lamington National Park is the best known and has an extensive set of well constructed walking tracks. Most can be walked as day walks from resorts but there is also some worthwhile easy overnight walking on the track system, some medium standard walks on old closed tracks and some tough off-track walking. Further inland along the border, the Border Ranges, Girraween and Bald Rock National Parks, Boonoo Boonoo National Park and Sundown National Park all provide interesting walking. There are no major recognized routes as walkers follow a wide variety of routes through these national parks. There are good guide books to South-Eastern Queensland (see Guide Books) describing walks in these parks.

The most significant park in the south-east corner of Queensland for bushwalkers is Mt Barney. This is the highest mountain in southern Queensland and provides some challenging walks which border on being rockclimbs. Most trips are two day walks and camping is now restricted on the mountain - permits are needed.

The most interesting inland park is Carnarvon Gorge. This has a good track through the gorge which provides access to the plateau behind. Walks vary from 2 to 5 days through this dry area (I have yet to visit this park - so no separate page). Around the same latitude on the coast is Cooloola National Park which has a Wilderness Trail crossing it for bushwalkers. This one way trail provides a good 3 day walk and circuit walks are also possible.

Just north of Cooloola is Fraser Island, the world's largest sand island. This island has a good circular walking track of 3 days through the centre of the island or for those who are good off-track, the small national park at the north of the island has many lakes and is also worth exploring.

In the far north, near Cairns, are some major walking areas. Hinchinbrook Island, is Australia's largest island national park and is one of the few remaining accessible pristine areas in Queensland. A good walking track exists along the eastern side of the island, this is called the Thorsborne Trail. It provides a good 4 to 5 day bushwalk along the tropical coast. Permits and quotas apply so plan ahead.

Closer to Cairns is Mt Bartle Frere. This is Queensland's highest mountain and a good but rough walking track climbs steeply to its summit. It can be walked as a long one day walk or as a two day walk camping near the top. North of Cairns there are no recognised walking tracks but many areas which provide good walking for experienced walkers. The Daintree area just north of Cairns has very few walking tracks but has many good 2 and 3 day walks for those prepared to walk off-track. In the far north, (north of the last town, Coen), the real challenge for some is to follow the coast to Cape York, the northernmost point of Australia.