The opportunity to walk a 'new' long walking track in Australia does not happen very often. It also seemed a good idea for an easy long walk - well easy compared to the long walks we have done elsewhere. No walk of two months can be considered to be 'easy'. In September 1998 we headed off to Perth. Information about the small towns the track visited was rather lacking (we had no idea what shops existed) so we pre-packed and prepared all food in advance. We then drove from Perth to Albany on the day before the track opening, placing food drops in the small towns. The opening on the 13th September was well organised with a huge marquee on the lawn in front of the Albany Tourist Bureau. Over 400 people attended and a group of 21 set off on the 'official' walk from Albany to Perth. This was billed as the first group to walk the track and the criteria for joining was the ability to pay a $500 or $1000 entry fee - not previous walking experience. While it happened that some of that group were very experienced, that was not obvious at the application stage. 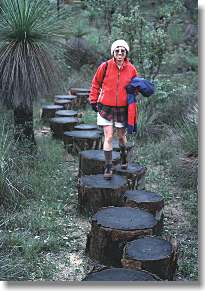 As we did not want to walk in a large group of unknown experience, we did not apply to join the 'official' group. Instead, we headed back to Perth and started walking from Kalamunda the next day on the 14th September. With only two of us and no fixed itinerary, we walked for 51 days to finish at Albany on November the 3rd. We did not use any rest days as we found it to be easy compared to other walking trips we have done. The 'official group' were still on the track so we returned to Perth and on November 7th watched that group finish at Kalamunda. It was fun seeing them for the third time (we also met them half way at One Tree Bridge) and we understood how they felt.

We were not the first to walk the 'new' track and carry our packs in traditional bushwalking style. John and Peter, and another pair of Colin and Jan Read ended at Albany on October 19th. About 1 week later, Mike Hall from England completed the walk then we were next on November 3rd (myself and Monica). Two days after us, Lis Janson and Jon Ridgeway from South Australia arrived at Albany (we walked with them for about 2 weeks) and around November 11th another 2 from South Australia, Peter and Tricia Knight also made it to Albany.

Undoubtedly, some of the tracks creators may have walked all of the track but they are unlikely to have carried their packs the entire way. The 'official' party who finished at Kalamunda on November 7th walked the track as well but did it in a different style as they had a considerable amount of 'help' like packs being carried on some sections and food being delivered to some of the huts along the track. They undoubtedly had a good time but a very different experience compared to what most other end-to-enders will have.

My opinion of the track