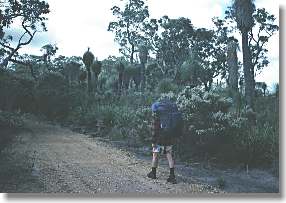 In 1972, Geoff Schafer, an active bushwalker from Perth convinced the Minister for Forests to support a walking track from Perth to Albany. Geoff was originally from Victoria and based his idea on Victoria's 'Alpine Walking Track' (now called 'Australian Alps Walking Track'). With limited budgets and resources, the track was shortened to run from Kalamunda (a Perth suburb) for 600km to Northcliffe. This was still an ambitious undertaking. As the track did not go to Albany, a new name was needed and it was named after the aboriginal inhabitants of the area, the Bibbulmun. By 1974, the track was completed. Over the next 4 years much of the route was altered as various land interest groups fought over the tracks alignment. Finally, in 1979, the track was officially opened. As can be seen, the tracks location was decided more by politics than by selection of the best route for walkers. A major criticism made by some bushwalkers was that the track mainly followed roads.

The next major change to the track was in 1988 when the first section from Kalamunda to Dwellingup was moved east to avoid a mining region and the southern end was extended to Walpole. While this looked good, in reality, the 1979 and 1988 track alignments followed many roads and walkers often had to dodge heavy vehicles, four wheel drives and cars as they walked along the 'track'. Like other land managers have done in many other places, the track had been sited along hard roads and major vehicle tracks. Of course this made maintenance of signs and facilities easy to inspect but did not create a very interesting walk for those who like the bush. While some did walk the original track, many bushwalkers visited other places as they found the track uninteresting. The original idea was good but the track's location was not liked by many.