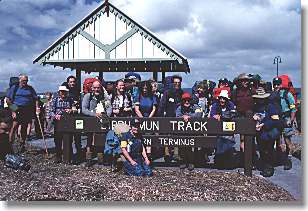 In 1993, CALM, the government department who manages most public lands including forests and national parks in Western Australia, decided to solve the problems of the track. For a model, they choose the Appalachian Trail in the USA. The biggest issues over the original track had been due to conflicting land uses and also the unattractive track alignment.

It was decided to start fresh and basically ignore the original track alignment and site the track past as many of the best features that are interesting to bushwalkers. The decision was made to basically cut a new track and extend it to Albany thus fulfilling Geoff Schafer's original concept. In doing this they used less than 10% of the 1988 alignment and considering how fast this construction was done it is an impressive effort. While not perfect, they have tried their best with limited resources and budgets and certainly improved the track. Since the track opened in 1998, CALM have continued work by re-routing some sections and building bridges over streams.

The first section of the new track from Kalumunda to Brookton Highway opened in 1995, in 1997 the new track was extended to Brookman Highway (just north of Dwellingup) and finally in September 1998 the completed new track was opened at Albany. While the track is now marked throughout, some sections along the southern coastline are still rough and there will be considerable construction work to be done over the next few years. While most work will be improvements like bridges, steps and hardened surfaces, there already has been some re-locations to avoid places that have problems. Walkers should follow any signs or markers.

I expect this track will mature just like the Great South West Walk has done. Initially, the big effort is made to get the track marked then, as finances allow, road bashes are replaced with purpose built walking tracks and any alignment errors are fixed with new track. Such changes will make this good walk even better.